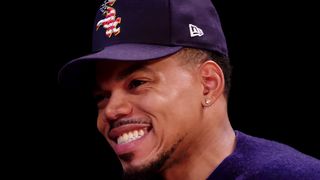 On the latest episode of Hot Ones, Chance the Rapper has declared his love of Shia LaBeouf‘s rapping skills. “Shia LaBeouf is one of the best freestylists of all time. . . I mean, like, period,” Chance said around the four minute mark in the video above.

LaBeouf has proven his lyrical talent on a number of occasions, but it was back in 2016 when he appeared on Sway in the Morning that his unique rhymes first registered for many. Watch him unleash on the “5 Fingers Of Death” segment below.

Whether he was referring to his bars on Sway in the Morning, his nearly three-and-a-half minute“Zapruder” freestyle on The Breakfast Club or the various, weird and seemingly unprompted freestyles that have surfaced on YouTube, it’s clear that Chance appreciates what the Honey Boy writer is putting out there.

Find out why Shia LaBeouf is the rapper we need right now, here.

On this episode of The Dropcast, we are joined by LL Cool J, where we discuss his current projects and LL shares his thoughts on the shoes and how the recent announcement of adidas and Prada’s collab shows that classic hip-hop is culture. Listen below.

Shia LaBeouf Debunks Myths About Himself on “Hot Ones”
MoviessponsoredSeptember 19, 2019

Chance the Rapper Says He Feels Fans Want Him to Kill Himself Over ‘The Big Day’
MusicsponsoredAugust 6, 2019
Follow
Highsnobiety Music
What To Read Next
Load More
Search Results
Load More