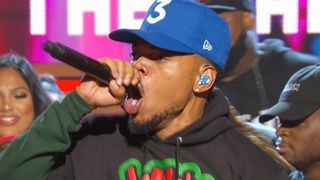 Chance the Rapper recently appeared on Wild ‘N Out‘s season 12 kickoff to defend his title after beating Nick Cannon in a rap battle just last summer. While on the show, Chance hilariously name-dropped Kanye West and also referenced Donald Glover‘s Atlanta. The ever-popular emcee also closed out the program by performing his new collaboration with Reeseynem, “What’s the Hook.”

Press play above to watch Chance the Rapper unleash “What’s the Hook,” then see underneath for other clips from the Wild ‘N Out showcase. You can watch the entire episode here.

In other music news, Drake dissed Kanye West while on his tour Migos, saying ‘Ye flopped.