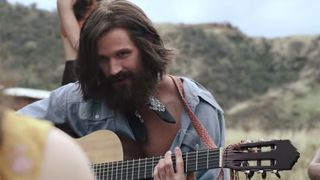 American Psycho writer and director Mary Harron has been tapped for the new Charles Manson film, Charlie Says. As opposed to primarily focusing on the infamous cult leader, the movie revolves around the three women who were fully committed to doing his bidding. Matt Smith stars as Charles Manson alongside Hannah Murray, Sosie Bacon and Marianne Rendón who portray Leslie Van Houten, Patricia Krenwinkel and Susan Atkins.

Charlie Says takes place years after the Tate and LaBianca murders that catapulted the Manson family into the public eye. While in prison, Van Houten, Krenwinkel and Atkins remained under the spell of Manson despite the efforts of an empathetic graduate student who attempted to rehabilitate them. The film is slated to premiere on May 17. Watch the full trailer above.