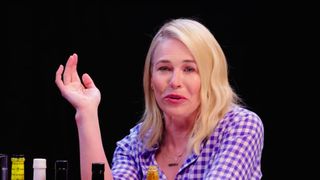 Season 8 of Hot Ones continues as comedian/TV host Chelsea Handler is the latest celebrity to take on the wings of death. She’s also promoting her new book, Life Will Be the Death of Me…and You Too!.

“I have a bad history of chicken wings so I wanted to come and kind of face it,” Handler says when faced with the challenge. She opens up about everything from her career, to dogs, skiing, thirst traps, to confirming her rumored relationship with 50 Cent (17:39 mark) and more in the 26-minute video above.

In regards to her career, Handler recalled a night while attending a DUI class that motivated her to pursue comedy. “I got a DUI when I was 21 and that scared me straight,” she says, explaining she had to attend a DUI class one night a week. “Everyone at some point had to get up and tell their story and I was like, ‘F*** that.’ I didn’t want to publicly speak. I was so embarrassed.”

Handler was eventually forced to speak in front of the class then continued, “I started telling everyone the story of how I called the cop a racist even though we were both white,” she said. “I had my sister’s I.D. that I was using so I got in even more trouble. People started laughing and they were howling. I didn’t want to get off the stage.”

After seeing the positive results of her public speaking and her peers suggesting she do standup, Handler decide to take the leap. “That’s how I got the guts to do it,” Handler said.

Enjoy the full video above and see how Handler handled the spicy wings challenge.

Ashton Kutcher Reveals He Just Threw Away All His Trucker Hats on ‘Hot Ones’
MoviessponsoredSeptember 27, 2019