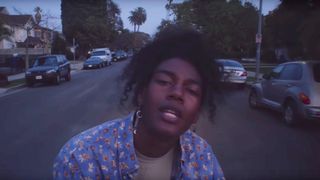 Similar to many of his peers in the music industry, Choker is a multi-hyphenate with the ability to sing, rap, and produce. The Detroit-based artist is following up last year’s Honeybloom album with a brand-new single called “Petrol Bliss.” The bouncy track is meditative enough on its own, but the accompanying visual emits even more tranquility into the atmosphere as Choker takes a solo joyride with a bunch of plants, submerges himself in a bathtub, and practically floats down a quiet street with the dusk behind him.

This track is featured on Choker’s forthcoming project titled Mono No Moto which you can stream in full below. He briefly explained the inspiration behind the EP in conversation with The FADER.

“There’s this moment eternized by Pascal Maitre; 3 Equato-Guinean girls standing side by side after their first communion,” he said. “Each is wearing a white dress and a distinct pair of colored sunglasses. For months I would return to the photo to take whatever it gave, often textural ideas, an occasional melody or chord. Eventually the fragments came to be a whole and I had three projects sewn up, ‘Mono No Moto’ being the first.”

End your day on a high note by diving into the whimsical world of Choker. If you like what you hear, catch him on tour starting in March and check the full list of dates here.

Bliss Out to Zack Bia’s “Not In Paris” Party Playlist
MusicsponsoredJuly 3, 2020