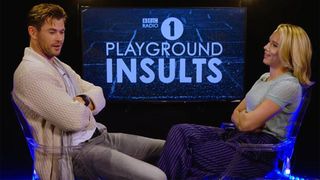 Avengers: Endgame co-stars Chris Hemsworth and Scarlett Johansson sat down to trade insults on BBC Radio One this week.

Unfortunately, both actors lacked the Stark-like callousness to deliver the required “killer insult” to end the game. Instead, the competition shifted into a Marvel therapy session. Take a look at the video above.

Johansson initiated the shift from shooting insults to airing grievances by admitting she had difficulty with conflict. “It’s really hard to insult you Chris” she conceded, “you’re such a good person,” although he did get some heat for his outerwear, which the Black Widow actor correctly and repeatedly identified as a “grandma cardigan.”

The competition, which was dubbed by the referees as the “politest game ever,” ended in a tie.