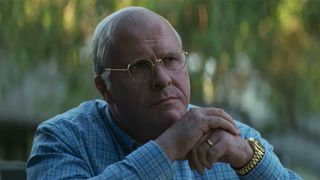 Christian Bale has undergone some wild transformations in the past, but a role as Dick Cheney may be his most eye-opening yet. Here we see the 44-year-old actor playing the former Vice President of the United States in upcoming biopic, Vice.

From director Adam McKay (The Big Short), Vice details the epic story of a how a Washington insider became the most powerful man in the world as he was Vice President to George W. Bush.

Alongside Bale, Amy Adams stars as Lynne Cheney, Steve Carell as Donald Rumsfeld, and Sam Rockwell as George W. Bush. The movie is due in theaters December 25.

Now, here are some of the craziest movie body transformations of all time.

Take a Close Look at the New BAPE x Pusha-T Collab Before It Drops
MusicsponsoredJanuary 15, 2020
What To Read Next
Load More
Search Results
Load More