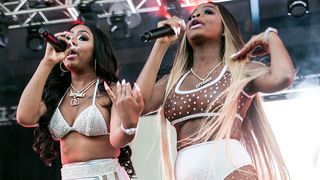 Just days ago City Girls revisited their debut album, Period, releasing the official music video for the LP’s title track. Now the rap duo return with a new drop, remixing Drake‘s “In My Feelings,” of which they featured on the original.

In My Feelings Remix out now Link In Bio @champagnepapi #FreeJt

The tune also arrives as Drake shared his “In My Feelings” video just last week, starring Phylicia Rashad, La La, Big Freedia, and Shiggy, the man behind the “In My Feelings” dance/challenge. Yung Miami appeared in the aesthetic as well, showing support for her City Girls partner by sporting a “Free JT” jacket. JT is currently serving a two-year prison sentence for credit card fraud.

City Girls’ Point Blank Period documentary is on the way.

In other news, Drake might be developing a “God’s Plan” game show.