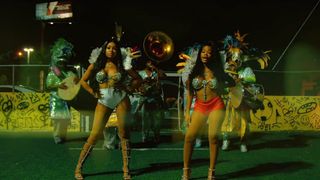 Fresh from appearing on Drake‘s hit single, “In My Feelings,” City Girls return in support of their debut album, Period, releasing the official music video for the project’s title track. In the Video God-directed aesthetic, we see JT and Yung Miami enjoying some fun in the sun in their hometown of Miami, riding jet skis and rapping on the beach.

The video was shot before JT’s two-year prison sentence for credit card fraud. Press play above to check it out.

In addition to the “Period (We Live)” clip, City Girls also share the trailer for their Mass Appeal-helmed documentary, Point Blank Period. The film dives into the success of the duo, as well as JT’s aforementioned prison sentence.

You think you know the City Girls, you have no idea. #StayTuned documentary coming soon 🎥 #FREEJT @massappeal

You can revisit City Girls’ Period below.

Now, here’s where you can cop the grillz Drake is wearing in his ‘In My Feelings’ video.