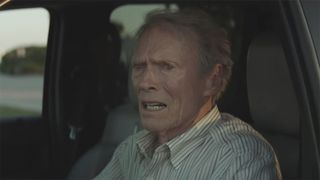 Clint Eastwood is back in front of the camera in upcoming crime-drama, The Mule. Not only is the 88-year-old entertainer in his first lead acting role since 2008, but he also directed the picture.

In The Mule Eastwood stars as Earl Stone, an 80-year-old who winds up becoming a drug courier for a Mexican cartel. The story is based on World War II veteran Leo Sharp.

Alongside Eastwood, Bradley Cooper, Dianne Wiest, and Michael Peña feature in the film, which is due to land in theaters December 14. After watching the official trailer above, hit the comments to let us know if you plan on seeing The Mule.

For more movies, check out Emily Ratajkowski and Aaron Paul in the first trailer for ‘Welcome Home.’