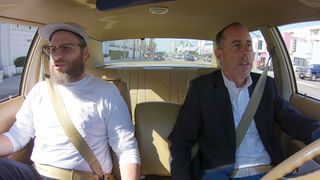 Jerry Seinfeld‘s long-running talk series Comedians in Cars Getting Coffee is returning for its 11th season. Ahead of the premiere later this month, Netflix shares the official trailer for the beloved show.

Seinfeld begins the promo by calling out a slew of other programs that have copied his Comedians in Cars Getting Coffee format, including Carpool Karaoke, for example. From there we receive glimpses at this season’s slate of celebrity guests, as the likes of Seth Rogen, Eddie Murphy, Jamie Foxx, Ricky Gervais, and Matthew Broderick, among others, join Jerry in hilarious caffeine-filled adventures combining coffee, laughs, and vintage cars.

Season 11 of Comedians in Cars Getting Coffee, which also features Sebastian Maniscalco, Martin Short, Mario Joyner, Melissa Villaseñor, Bridget Everett, and Barry Marder, comes to Netflix on July 19. You can, however, go ahead and stream previous seasons of the series.

Cardi B’s Reason for Getting Back With Offset Is Hilarious
MusicsponsoredSeptember 16, 2020

Here’s Where to Get Discount on New Season Chinatown Market, CDG & More
SelectssponsoredJuly 6, 2020