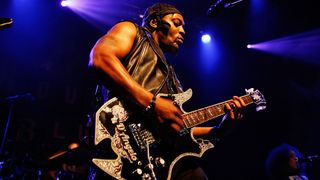 Following the recent premiere of Devil’s Pie: D’Angelo at Tribeca Film Festival, the first trailer for the documentary has been released. The Carine Bijlsma-directed film chronicles D’Angelo‘s 14-year hiatus and the events that took place leading up to his long-awaited comeback with Black Messiah. During that period where the R&B icon was seemingly off the grid, he was dealing with a series of personal issues from substance abuse and deaths in the family to recovering from a car accident.

As you can see in the short clip, the documentary features interviews with some of D’Angelo’s closest collaborators like Questlove along with footage from rehearsals for the Second Coming tour in 2015. The film was shot over the course of two years. Billboard reports that the end of the film hints at a follow-up to Black Messiah being in the works with D’Angelo spending more time in the studio.

Stay tuned here for more updates and watch the full trailer in the video above.

In other news, Chinatown Market founder Mike Cherman and Adam Petrick, global director of brand marketing at Puma, pulled up by our office to drop some deep knowledge. Check below.