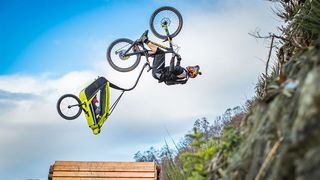 Scottish trials cyclist Danny MacAskill has posted a fun new video in which he takes his friends’ 4-year-old daughter Daisy out for a spin.

“Danny Daycare” sees MacAskill and Daisy head out into the stunning Scottish countryside for a lovely bike ride, but it’s not long before he’s up to his usual tricks with the baby trailer in tow.

At first it looks like it’s a little bumpy for poor Daisy, but once he really gets going you realize that of course there isn’t really a toddler in the trailer.

Watch the video above, and make sure to stick around for the painful-looking bloopers at the end.