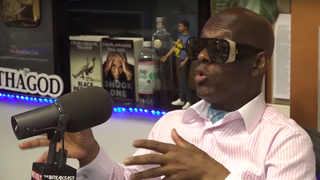 Dapper Dan stopped by The Breakfast Club for an expansive, one-hour interview to promote his new book, Made in Harlem: A Memoir. Among the topics they discussed was the beginning of his official relationship with Gucci.

After the luxury house was called out for ripping off his bootleg design, his son urged him to reach to work with the company. To see if Gucci was serious, he asked them to come out to his brownstone in Harlem. What convinced him to work with them was Alessandro Michele assuring him that he meant to pay homage, not rip him off. While other companies had paid homage to him before, Gucci was the first to offer to actually pay him for his work.

He also spoke on Gucci’s blackface controversy, saying that the company’s Changemakers program has made a huge difference that he wants to see in other brands.

Charlamagne then asked Dapper Dan why black people value established luxury houses more than black-owned brands. He responded by saying it takes time to build the same reputation, and that the desire is driven by its inherent unattainability.

Watch the full interview above. And for more from Dapper Dan, read our interview with him and A$AP Ferg.

Special Report: Cultural Credibility Is Everything — Here’s How Brands Build It
StylesponsoredJune 11, 2019