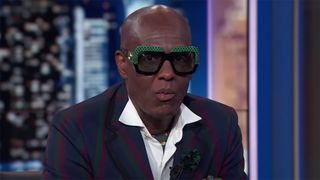 Dapper Dan continues to make his rounds in promotion of his new book, Made in Harlem, as the legendary fashion designer recently appeared on The Daily Show with Trevor Noah to discuss his unique path to success.

Dan began the conversation by touching on his start as a hustler, disclosing that he learned very early on that he needed to figure out how to do things himself, from opening his own store to making fabric and beyond. Widely regarded as the father of “logo mania,” Dan became well known for dressing rappers in high fashion brands with all-over prints, a trend that is of course unmistakably popular to this day.

We also witness Dapper Dan speaking his inspiration behind the logo treatment, as well as dressing the likes of LL Cool J, Jam Master Jay, Salt-N-Pepa, and Mike Tyson. Once fashion houses got wind of Dan’s designs, they then sued him and stole many of his concepts. Fast forward and we now of course know that Dapper Dan is currently working alongside these high fashion labels, namely Gucci. Elsewhere during his conversation with Trevor Noah Dan details his collaborative efforts with Gucci, while also discussing the label’s recent inclusivity initiative.

Press play above to hear Dapper Dan talking about his path to success, and be sure to pick up a copy of his book if you haven’t yet.