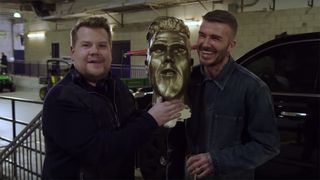 The Los Angeles Galaxy will be honoring David Beckham with a statue placed outside of the stadium, as the artwork is months in the making. As the time for the ceremony nears, Beckham must give the final thumbs up for the statue to be considered good to go. There’s just one thing, Becks’ pal James Corden swapped out the statue prior to David’s visit, replacing it with a horrendous stand-in.

We made a fake statue of David Beckham. See how he reacts here… https://t.co/I8PfLzaQVd x pic.twitter.com/XWFS8J221E

When Beckham arrives to the facility, he is greeted by numerous actors posing as fans. One overly enthusiastic individual purposefully associated Becks with the wrong team, while simultaneously calling him Dave, which he evidently is not fond of.

Before unveiling the statue, the Galaxy show Beckham a preview of the tribute video that will air prior to the statue reveal at the stadium. Instead of standout performances by DB, the clip is filled with career lowlights.

When the sheet is finally lifted from the statue, Becks is dumbfounded by the horrendous sculpture, which looks absolutely nothing like him. He somehow manages to remain fairly calm all things considered, but insists the piece cannot be made public.