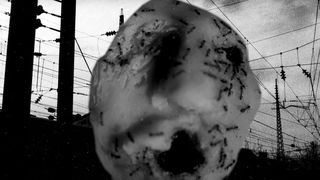 A new short by Twin Peaks writer-director David Lynch has appeared on YouTube, is called Ant Head, and is basically 13 minutes of ants crawling over a massive head-like ball of cheese, raw chicken, and mortician’s wax. If you’re familiar in any way with Lynch’s oeuvre (particularly his earliest work), none of this should come as a massive surprise. It’s abstract AF, and you can watch it above.

According to Rolling Stone, the clip is actually a recreation of an experiment Lynch conducted in his kitchen three decades ago in response to an ant infestation (as you do). The original “ant head” wound up on the cover of Julee Cruise’s 1993 album The Voice of Love.

The new Ant Head also has a musical aspect. The short features one and a half tracks — “Frank 2000” and “Woodcutters From Fiery Ships” — from Lynch’s long-lost collaborative album with Twin Peaks composer Angelo Badalamenti, Thought Gang. The project is a spoken-word jazz album that was recorded in the ’90s and can now be streamed below.

As well as Twin Peaks, Badalamenti has worked with Lynch on a number of the director’s movies, including Blue Velvet, Lost Highway, and Mulholland Drive.

Is Ant Head enjoyable Lynch weirdness or does it bug you? Let us know below.

Now, watch Jonah Hill break down the most iconic roles of his career.

Academy Reveals David Lynch Will Finally Get His First Oscar This Year
MoviessponsoredJune 4, 2019