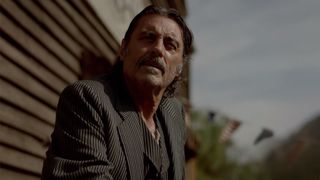 Thirteen years after canceling its much-lauded Western series Deadwood, HBO has shared the trailer for the long-gestating Deadwood: The Movie, which is finally set to drop on May 31.

The film is set in 1889, 12 years after the last, inconclusive episode of the TV show. Residents of the eponymous town are celebrating South Dakota becoming a state, but as HBO puts it, “Former rivalries are reignited, alliances are tested, and old wounds are reopened, as all are left to navigate the inevitable changes that modernity and time have wrought.” Watch the trailer above.

Original cast members reprising their roles include Ian McShane as potty-mouthed bar owner Al Swearengen, Timothy Olyphant as Sheriff Seth Bullock, Molly Parker as Alma Garret, and John Hawkes as Sol Star. Two of the original show’s actors, Powers Boothe (Cy Tolliver) and Ralph Richeson (put-upon hotel cook Richardson), have passed away since the show ended, and their roles have not been recast.

The film is written by series writer David Milch and directed by Daniel Minahan, who helmed four episodes of the show.

‘Deadwood: The Movie’ Is Giving HBO’s Series the Ending It Deserves
MoviessponsoredApril 26, 2019

HBO Shares First Trailer for Its Next Fantasy Series ‘His Dark Materials’
MoviessponsoredMay 17, 2019
What To Read Next
Load More
Search Results
Load More