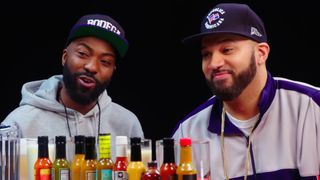 Season 8 of Hot Ones kicked off with Gordon Ramsey, followed by the ladies of the Comedy Central hit, Broad City. Now, comedy duo Desus Nice and The Kid Mero are the latest to take on the wings of death, and if you’re familiar with the two, you already know that the episode is filled with laughter.

To kick things off, the Bronx duo reminisce on their times with Complex, revealing how their career started. After sharing laughs on the good old days, the Bodega Boys go off about everything from their thoughts on J. Cole’s music, Tekashi 6ix9ine, their encounter with Kanye West for a picture to avocado-only restaurants and much more.

Around the nine-minute mark, host Sean Evans puts them on the spotlight about their prior line of reasoning that “J. Cole is trash.” Mero jokes, “He has dreads now, so he’s woke.” Desus elaborates, “We can’t say he’s trash. We still Bronx scumbags, so I’m not really listening to woke music. I’m listening to music that’s probably bringing down black people. I gotta hear a little gunplay, a little misogyny. I need some cocaine raps. So you know, J. Cole is not really my cup of tea.”

The two then proceed to speak on 6ix9ine, with Mero joking that rapper’s snitching is on a global level. “He’d throw his grandma in jail,” he says. Desus then shares a similar take saying, “I think he saw a lot of Law And Order so he thought they’d put him in witness protection…You have a 69 tattooed on your face! Are you going to go to Scotsdale Arizona and start over?”

Enjoy the 30-minute episode above for more and to see how they handled the spicy wings challenge. The duo are also scheduled to premiere their brand new show on Showtime tonight at 11 p.m. EST. Peep the clip below.

For the series premiere of #DESUSandMERO, it's only right our first guest is a BX luminary.

Hot on the Heels of ‘Jesus Is King’, the “Soft Vision” YEEZY 500 Is Now Available
SelectssponsoredNovember 1, 2019