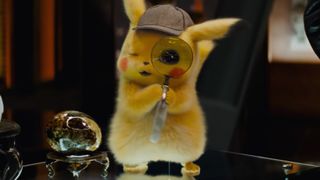 I actually have this bed. #DetectivePikachu

In the 30-second promo, we continue to see the the adorable and comical iteration of Pikachu, portrayed by Ryan Reynolds. Just to recap, the movie is based on the Nintendo 3DS title of the same name, and it follows 21-year-old Tim Goodman played by Justice Smith, as he takes on a case where his father Harry Goodman has disappeared. Like the game, Tim joins forces with the wise-cracking Detective Pikachu to solve the case.

A notable scene in this latest clip is when Pikachu displays his signature quick attack move on a giant balloon, and another towards the ending, when Pikachu comments on Tim’s bed headboard which is the shape of Pikachu’s pointy ears. “I’ve never been so flattered and creeped out at the same time,” Pikachu said.

Detective Pikachu is slated to hit theaters on May 10.

‘Detective Pikachu’ Is a “Bummer” but Critics Say Ryan Reynolds Saves It
MoviessponsoredMay 3, 2019