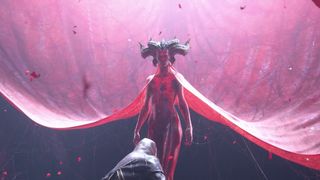 Blizzard announces the next installment for its action RPG, Diablo IV at BlizzCon 2019. Being developed for current-gen platforms including PC, PS4, and Xbox One, game director, Luis Barriga promises that the upcoming title will be going back to its roots with a darker tone and story.

It will be “a bleak and shattered hellscape bereft of hope and beset by demons,” he reveals.

The announcement of the game comes with a lengthy, brutal cinematic trailer followed by a gameplay video showing three confirmed playable classes: barbarian, sorcerer, and druid. Like previous titles, deep customization will be available for players to create their own unique builds. Blizzard describes each class as:

The Barbarian, known for their unparalleled strength and brutal melee combat, utilizes a new and more powerful system in battle, Arsenal, which arms them with the ability to carry and rapidly switch between four different weapons at a time by assigning them to individual attacks.

The Sorceress hearkens back to their Diablo II roots and shapes the elements to obliterate their foes by impaling them upon jagged spikes of ice, electrocuting them with bolts of lightning, or raining flaming meteors from the sky.

The Druid is a savage shapeshifter whose updated playstyle empowers them to fluidly transform between werewolf, werebear, and human form to unleash the raw power of nature’s fury on the forces of the Burning Hells.

A release date for the game has not yet been announced. Check out the gameplay trailer below.