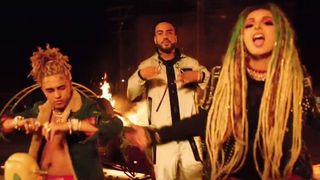 Deadpool 2 is currently the number one movie in the world, as today we receive the official music video for Diplo’s soundtrack cut, “Welcome to the Party.” The premiere arrives following last week’s lead-up visual starring a twerking Deadpool.

Diplo, French Montana, Lil Pump, and Zhavia all star in the Jason Koenig-directed aesthetic, which also features footage from the film. Press play above to check it all out.

With the movie in theaters, the coinciding soundtrack for Deadpool 2 is also available. The album features the likes of Run the Jewels, Skrillex, Pat Benatar, Celine Dion, and more.

For more, see what critics are saying about ‘Deadpool 2.’