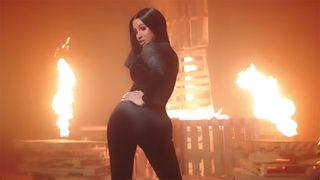 After releasing six videos on Friday and Saturday, DJ Khaled keeps the onslaught coming by sharing yet another clip in support of his recently released album, Father of Asahd. A followup to “Higher,” “Just Us,” “Celebrate,” “Jealous,” “Holy Mountain,” and “You Stay,” Khaled now drops his official music video for “Wish Wish” featuring Cardi B and 21 Savage.

Directed by DJ Khaled and Eif Rivera, the visual finds Cardi B stealing the show with her aggressive raps, as she’s surrounded by pyrotechnics and motocross riders while performing the track. Khaled is also present in the clip to serve as the hype man, while 21 Savage appears to spit his verse.

Press play above to check it out, then see underneath for DJ Khaled’s other Father of Asahd videos. Father of Asahd is Khaled’s 11th studio album, featuring the likes of Nipsey Hussle, Travis Scott, Beyoncé, JAY-Z, Chance the Rapper, Future, SZA, Justin Bieber, and many others.

DJ Khaled Is Still Mad About ‘Father of Asahd’ Not Getting No.1
MusicsponsoredJune 7, 2019
Follow
Highsnobiety Music
What To Read Next
Load More
Search Results
Load More