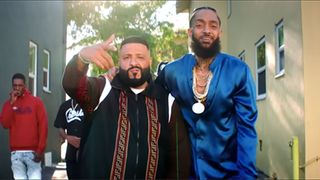 As promised, DJ Khaled‘s song “Higher” featuring the late Nipsey Hussle has arrived with an official music video. The visuals were filmed before the rapper’s death in March, with John Legend also appearing, providing piano and vocals. Watch the Eif Rivera-directed video above, which was filmed in Inglewood, California, close to where Nipsey grew up.

Khaled will be donating all proceeds of the song to Nipsey Hussle’s children. He wrote earlier this week, “[Nipsey] shared his energy and positivity with me on a video set for a song called ‘Higher.’ After much prayer and reflection; and with the full blessing of the Asghedom family, I am sharing that moment with the world.” He continued, “I, my co-writers, producers and label partners are donating 100% of all our proceeds from ‘Higher’ to Nipsey’s children, Emani and Kross.” “Higher” is part of DJ Khaled’s latest album Father of Asahd which dropped today. Stream it below.

DJ Khaled Is Still Mad About ‘Father of Asahd’ Not Getting No.1
MusicsponsoredJune 7, 2019