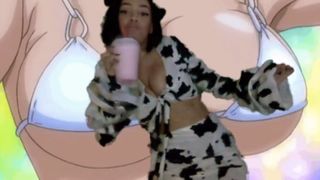 Over the weekend, everyone collectively lost their chill when clips from Doja Cat’s music video for “Mooo!” made their way around the Twitterverse. Of course, the whole thing is worth watching because it’s an entertaining spectacle. The super lo-fi visual shows the Los Angeles rapper decked out in a cow printed two-piece as glitchy animations and GIFs of boobs, milk cartons, farms and grassy pastures flash behind her. While all of this is happening, she casually sips on a strawberry milkshake, eats a burger and stuffs french fries up her nose.

Naturally, the tastefully bad quality of it all makes for perfectly meme-able content and it instantly turned into a viral success. Since the video was unleashed into the wild, wild web, all timelines have been buzzing to the playful catch phrase “Bitch, I’m a cow.” Doja Cat recently initiated the #MOOchallenge to keep the momentum going and it doesn’t look like we’ll be able to stop talking about cows anytime soon.

Fans that are familiar with Doja Cat’s previous work know that she tends to rock feline-inspired attire, but the switch-up for this brilliant bop isn’t coming out of nowhere. The description for the video reads “My hide is not your prom dress.” If you manage to move past the catchy chorus and the twists on nursery rhymes, the song digs deeper into the territory of owning up to being the cream of the crop with lines like “Bitch I’m too smooth/ I’m not in the mood/ Trynna make moves.” (Dare we call it a modern day feminist anthem?) In a tweet, she also pointed out that “cows are bigger than goats” so that’s something to keep in mind.

doja cat really just blessed us with another symbol of femininity. cats are out, cows are in.

mooo by doja cat has to be some kind of ancient incantation being spread by a cult, there's no way a song has gotten stuck in so many peoples heads in such a short amount of time we're all collectively summoning some demonic cow into our homes and I'm kind of here for it

Doja Cat seamlessly weaves in references to Kelis’ 2003 hit “Milkshake” and the Wu-Tang Clan classic “C.R.E.A.M.” as well. And now that Chance The Rapper publicly declared that he’s officially a fan, it’s time to giddy up and hop on the bandwagon before you’re even later to the party.

This really the song of the century aint shit topping this…. got me randomly singing "Moooo" smfh pic.twitter.com/BJqIP7gnBC

Mercury is still in retrograde, but for what it’s worth, 2018 has been all about embracing the cowboy lifestyle. Earlier this year, Calvin Klein saddled us in with his western-themed collection which included a star-studded “Our Family. #MYCALVINS” campaign that took place in a barn and featured the Kardashian-Jenner sisters, A$AP Mob, Solange Knowles, and Millie Bobby Brown. The indie rock world even got on board with the movement as demonstrated by Mitski branding her fifth album with the title Be the Cowboy and the universal admiration of country singer Kacey Musgraves.

Everybody losing it today, huh? pic.twitter.com/4PLVpcFZXj

At some point, we hope that Doja Cat recruits the Chick-fil-A mascot to be a part of her shenanigans or at the very least hits the stables and chills with a real cow. Hungry for more? Scroll down and crank up Doja Cat’s debut album Amala.

In other news, Stefflon Don pulls a Rihanna in her visual for “Lil Bitch.” Peep it right here.