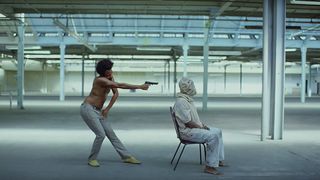 Directed by Atlanta regular Hiro Murai, the politically-charged video focuses on Glover dancing in a chaotic warehouse. It also features a lot of violence. In the first scene, Glover casually shoots a man and later guns down gospel singers — a potential reference to the nine people killed in the Charleston church massacre in 2015.

In case you missed it, watch the video for “This is America” above, then scroll to see how Twitter reacted. What did you think of the video? Let us know in the comments.

A lot of fans were impressed

I've been praising Childish Gambino / Donald Glover since my tumblr days but yo this takes it on a new level pic.twitter.com/tAoiw9yQZz

Me when I realized that gambino's dance moves distracted me from all the craziness happening in the background and that's exactly the point he's trying to make… #ThisIsAmerica pic.twitter.com/ZlMxE2VwZV

Donald Glover is a Genius. pic.twitter.com/zIAW8lecU7

Me turning up to #ThisIsAmerica while also thinking about its underlying message pic.twitter.com/ZWRnSNuaDT

shoutout to the rappers that express the experiences + emotions around them and are not afraid to be different. childish gambino is an absolute genius pic.twitter.com/l3C4HbgAEr

so… Childish Gambino is back ? pic.twitter.com/TayIWkfGhT

he is one of the most inspiring creative minds in the game.

This is America..
*Guns handled with care
*Keep dancing and you won’t be shot

Donald is the best.

What happens when you put creative agency in the hands of artists. ?? Powerful narratives, carried by the vehicle of entertainment. Specificity is the universal connective tissue. Big shout to @childishgambino for this one ?? #ThisIsAmerica pic.twitter.com/u9N6Wb5dzL

This Video Is Iconic https://t.co/0F4GeIkj4s

I can't remember the last time I watched a music video all the way to the end, let alone one five times in a row. Incredible work! #ThisIsAmerica

But not everyone was sure about the level of violence

"This is America" rly shows how distant Glover is from the black public. He invokes imagery of the Charleston shooting to shock white viewers w little regard for the living, breathing survivors. It's like he learned how to love (and use) his blackness without loving black people.

Last comment. At this point to me, between the lyrics and the video, it almost reads like a mockery of how young black people choose to enjoy themselves… and juxtaposing it to the regular and real recent trauma we've experienced reads sadistic. TO ME.

Erasing white people from white violence is not my kind of art but y’all go on ahead.

I…am not massively excited about Donald Glover’s video. I like the tune well enough, but I’m a little leery of how violence is evoked and why and that Charleston recreation felt gratuitous.

His dancing made my morning, though.

Others focused on catching all the references in the video

Death riding the Pale white horse while he is followed by Hell (represented by police) going totally unnoticed because of dancing and pop culture in the foreground is the single greatest cinematic message I’ve seen in a music video to date. #ThisIsAmerica pic.twitter.com/DYaPjbvoym

Me trying to watch Gambino & catch all the hysteria in the background #ThisIsAmerica pic.twitter.com/67FP66o3wn

Childish Gambino is a genius. A thread of all the imagery in This Is America:

No one caught the fact that at 2:13, a man jumps to his death. It shows how we don’t care about suicide in America, yet are all in when it’s a dance/trend. This Is America. #thisisamerica @donaldglover pic.twitter.com/OXhFMUjX6V

The more you watch the #ThisIsAmerica video, the more you realize that there's so much going on in the background and that Donald is just a distraction – and that's the whole point. #StayWoke (don't catch you slippin' now)

While more made references to Kanye

Donald Glover’s “This is America” song and video is our reward for surviving Kanye West’s week of white supremacy.

When God closes a Kanye, he opens a Childish Gambino

#ThisIsAmerica Here's a choice. Let's stop paying attention to @kanyewest and figure out that @donaldglover has more important things to say. He literally just killed it on #SNL. Time to move on.

#ThisIsAmerica It’s like Kanye was supposed to be our musical Anakin Skywalker,but now Childish Gambino/Luke Skywalker (The New Hope) has filled the seat meant for the ‘father’. THE IRONY… pic.twitter.com/OBShYaY6tH

Childish Gambino is what Kanye aspires to be but fails to attain. #ThisIsAmerica

Twitter Was Not Impressed With Trump’s Weak A$AP Pun
MusicsponsoredAugust 3, 2019