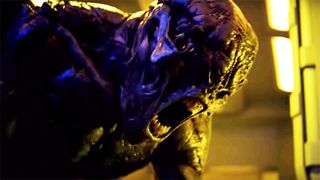 As we are nearing the fall release for Doom: Annihilation, Universal Pictures premieres a new teaser trailer for the next installment from the Doom universe.

Step into the world of @DoomMovie with this exclusive sneak peek & see the full version on @DreadCentral. Pre-order Doom: Annihilation on Blu-ray, DVD, & Digital to own on October 1 https://t.co/dHjASkxXv7 #DoomMovie pic.twitter.com/rXt6ba57X3

Building upon the legacy of the first-person shooter video game franchise, Doom: Annihilation finds a group of space marines stumbling upon a portal on Mars which provides teleportation throughout the universe. Things quickly take a turn for the worst, however, as the scientists have merely opened the gates to hell, and demonic creatures now threaten to take over Earth.

Amy Manson, Dominic Mafham, Luke Allen-Gale, and Nina Bergman star in Doom: Annihilation, which is written and directed by Tony Giglio. The sci-fi picture is scheduled to release October 1.