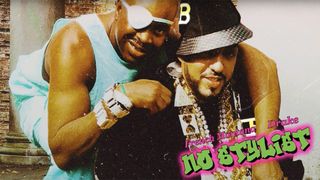 French Montana released “No Stylist,” his fiery new single featuring Drake, midweek. Now, Genius has come through with a video which picks apart the lyrics.

The track made the headlines for Drake’s line which takes aim at Kanye West. “Keeping it G, I told her don’t wear no 350s around me,” spits the Toronto rapper, referencing West’s YEEZY sneakers. Despite flirtations with adidas, last month the Nike signee seemingly reaffirmed his commitment to the Swoosh with his “checks over stripes” lyrics on Travis Scott’s “Sicko Mode.”

West and Drake have endured a volatile relationship of late, with many believing it was the former who shared information to Pusha-T which led to the ex Clipse man’s Drake diss track “The Story of Adidon.” This past week, West called Drake out in an Instagram rant.

Listen to what Genius has to say about the track above.

Where do you stand on the Drake vs. ‘Ye beef? Leave us your thoughts below.

This Is How Many Hits French Montana, Young Thug & Kendrick Lamar Actually Have
MusicsponsoredApril 23, 2020