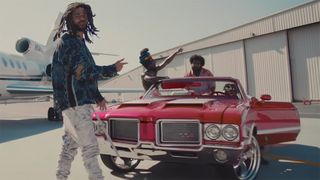 J. Cole and his Dreamville crew are back with a new video in support of their most recent compilation album, Revenge of the Dreamers III. The release of the “Down Bad” visual follows their “Sacrifices” aesthetic from August.

Dreamville’s Revenge of the Dreamers III released back in July of this year. In addition to showcasing the talents of the Dreamville roster, the album is packed with complementary features. You can revisit the project underneath.

On this week’s episode of The Dropcast, hosts Jian DeLeon and Noah Thomas are joined by DMV’s IDK who recently dropped his debut album Is He Real? featuring a slew of big hip-hop names.