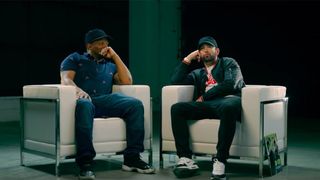 Following the trailer reveal, Eminem shares the first part of his anticipated new interview with Sway, centering around his recently-released Kamikaze album.

During the 12-minute sit-down, Em dishes on his surprise release strategy, as well as criticism surrounding previous albums. More specifically, the Detroit rapper points to 2009’s Relapse stating, “I listen back to that and cringe.”

At the end of part one, a preview for the final installment sees Eminem touching on his beefs with Joe Budden and Machine Gun Kelly. Em refers to MGK’s comments about his daughter Hailie.

“So I see, ‘Machine Gun Kelly talks about Eminem’s daughter’ or whatever, right? So I’m like, ‘What the fuck?’ I clicked on it. Then he starts doing a press run, basically, about Hailie. I’m like, ‘What the fuck. Yo, my man better chill.’ So, that’s not why I dissed him. The reason I dissed him is actually a lot more petty than that. Now, I’m in this fucking weird thing because I’m like, ‘I gotta answer this motherfucker.’”

Press play above for the first segment of Eminem’s interview with Sway, and be sure to check back with us for the second delivery.

For more, dive into a brief hip-hop history of rap battles.