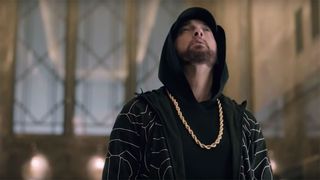 Eminem was the musical guest on Monday night’s episode of Jimmy Kimmel Live!. Instead of your run-of-the-mill performance in front of a studio audience, the rapper took to the mic to perform his Kamikaze song “Venom” on top of the Empire State Building.

Halfway through the clip above, there’s a comedic interlude where Em’s mic cuts out, and he proceeds to share an elevator ride with Kimmel sidekick Guillermo Rodriguez while recounting facts about the construction of the building.

In case you missed it, read why Eminem needs to stop dissing ‘Relapse’ right here.