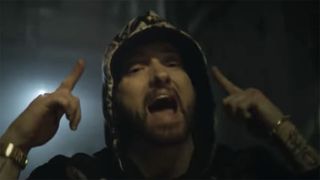 Marvel’s Venom is out in theaters today, and coinciding with the theatrical release, Eminem shares the music video for his contribution to the film, aptly titled “Venom.” The track also appears on Mathers’ recently-released studio album, Kamikaze.

Eminem’s “Venom” aesthetic picks up where “Fall” left off, as we see a guy grabbing the Revival CD that had previously been stomped on and left along the sidewalk. Upon touching the disc, the kid turns into a symbiote, thus bonding with everyone it touches.

Press play above to watch the clip.

Again, the Tom Hardy-starring Venom is now in theaters.