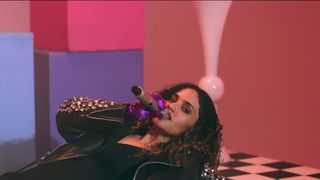 Following the recent release of her sophomore album Us, Empress Of a.k.a. Lorely Rodriguez has shared a self-directed video for her latest single “I Don’t Even Smoke Weed.” Decked out with a bedazzled leather jacket, the singer-producer takes the spotlight as she bounces around in the magenta tinted visual.

The catchy track as captures the pure essence of being so comfortable with a partner that all your self-doubts almost vanish around them. That’s not to say that it’s a smooth operation, but sometimes love is worth fighting against any struggles that come attached. This all-consuming feeling of buoyancy is really drilled into the production as the beats float through the speakers while Empress Of sings a deeply honest train of thoughts that could have been pulled from a journal entry.

“I don’t even smoke weed/ It gives me anxiety,” she softly sings while rolling her shoulders back. “But when I’m with you/ I’m too careless to/ Care what people think.”

Us is out now via Terrible Records/Caroline International. Empress Of will be embarking on a worldwide headlining tour in 2019. Scroll down for the full list of dates and revisit our intimate profile on Empress Of.

In other news, Yung Lean is releasing a new mixtape called ‘Poison Ivy.’ Get all the details right here.

15 Drops
The 15 Best Products to Drop This Week & Where to Buy Them
SelectssponsoredAugust 25, 2019