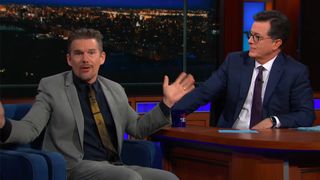 In promotion of his new film First Reformed, in which he portrays a troubled pastor, Ethan Hawke this week appeared on The Late Show with Stephen Colbert. Before he spoke on the movie, Hawke dove into seeking knowledge from masters of their craft, his of course being acting.

An acclaimed actor in his own right, Hawke went on to tell the story of when he met English actor Mark Rylance (Bridge of Spies, Dunkirk, Ready Player One) years ago. Ethan was chosen to be part of a Shakespeare’s Globe in London, of which Rylance was the artistic director, and he was particularly nervous about his role, sandwiched in between performances by Vanessa Redgrave and Paul Scofield. Rylance in turn provided Hawke with a trick to better get through his speech, which ultimately ended up working like a charm.

To hear the first-hand recounting from the four-time Academy Award nominee, press play above.

In other movie-related news, Ryan Gosling and Donald Glover are on the shortlist to play Willy Wonka.

The Anti-Valentine’s Guide to Gadgets That Cost Less Than a Date
SelectssponsoredFebruary 10, 2020

This Is Why Master P & Romeo Miller Are Quitting ‘Growing Up Hip Hop’
MusicsponsoredMarch 3, 2020
What To Read Next
Load More
Search Results
Load More