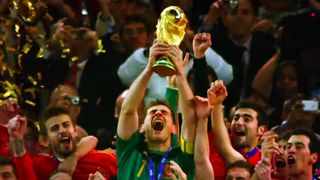 The 2018 FIFA World Cup is taking place in Russia this year, and to celebrate the 100-day milestone until the tournament’s kickoff later this summer, FOX Sports, the official English-language broadcaster of the World Cup, has teamed up with Russian neoclassical pianist and composer Kirill Richter, to create “Where Angels Fear to Tread,” the network’s original tournament theme song.

The one-minute spot above features Richter commanding a 23-piece orchestra, featuring strings, trumpets, cornets and a piano, which is complemented with a series of captivating moments that have occurred in past World Cup tournaments since starting in 1930, making it unforgettable in sports history.

With the riveting showpiece recorded in Moscow for what is expected to be the summer’s most-anticipated sporting event, which country are you rooting for?

In related news, the internet has fallen in love with Nigeria’s World Cup kit, and in case you missed it, check out the official ball of the 2018 FIFA World Cup by adidas.

Here’s What the 16-Year-Old Who Won $3 Million Playing ‘Fortnite’ Will Do With the Money
LifestylesponsoredJuly 29, 2019
What To Read Next
Load More
Search Results
Load More