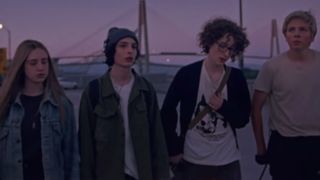 Not only does Finn Wolfhard star as Mike Wheeler in Netflix original series Stranger Things, but the 15-year-old entertainer is also in a kickass rock band called Calpurnia. Following the release of their debut EP, Scout, earlier this month, the Canadian crew is back in support of the effort to unleash the official music video for “Greyhound.”

In the aesthetic, we find each member of the group walking the streets alone, before ultimately meeting up on the top of a parking garage. Press play above to check it out, then see below to stream Calpurnia’s Scout.

In other music news, Drake’s ‘Scorpion’ will be a double album.