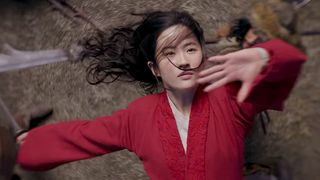 The first official teaser trailer for Disney‘s live-action Mulan remake has arrived, coming almost a year after we got our first look at Chinese American actor, model, and singer Liu Yifei as the titular hero.

Like the 1998 animated version, the remake draws on the same ancient Chinese poem, The Ballad of Mulan. Mulan tells the story of a young woman who enrolls in the men-only Imperial Army to protect her family from northern invaders. As we can see from the teaser trailer (above), this version seems takes a more serious approach, without the comic relief provided by Eddie Murphy in the cartoon classic.

The dramatic new retelling is directed by New Zealand filmmaker Niki Caro (Whale Rider, The Zookeeper’s Wife) and is scheduled to hit theaters on March 27, 2020.