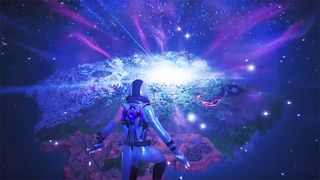 Twitter is full of freak-outs today as Fornite players around the world erupt in collective panic after a big asteroid in the game flared up, exploded, and sucked the entire map into a black hole. Watch the event take place in the gameplay video above.

The Fortnite game now shows only the black hole, which many seem to still be watching in hope of more information, especially considering Epic Games has deleted the game’s entire Twitter feed and replaced it with a black hole live stream.

It’s likely that this move is just a teaser for the game’s next season. As OG Fortnite players will know, this isn’t the first time something like this has happened — the end of season seven saw the game fall victim to earthquakes, which developed into a volcano at the start of season eight. What’s more, numbers have been spotted around the black hole that could be a teaser for the upcoming installment, though there’s no confirmation of this as of yet.

Elsewhere, some fans are blaming Elon Musk for the black hole, referencing a conspiracy theory from 2018 that claimed the Tesla CEO had bought Fortnite only to delete it. Similarly to how he responded to the news last year — “had to be done ur welcome” — Musk has responded in typical trolling fashion.

Find the best reactions to the Fortnite black hole below.

Her: He’s probably thinking about other girls

Him: I wonder what these numbers mean, did Elon musk really delete fortnite pic.twitter.com/3STYBsqVV8

While others are blaming ‘The Simpsons’

1) Epic Games are masters of viral marketing, if that wasn't proven already.

2) Fortnite players will literally stare at a picture of a black hole for hours instead of playing something else. pic.twitter.com/bOgHJU0a0b

my lil bro is watching that black hole for 1 hour #fortniteevent #fortnite pic.twitter.com/8ut3tLDjsM

going to staying up to
sleep look at a
black hole#Fortnite pic.twitter.com/eqrH405v3X

"No one is stupid enough to watch a blackhole for 4 hours" #Fortnite Me: pic.twitter.com/NwtgWTCs33

How my eyes feel after looking at a black screen for 7 hours #Fortnite pic.twitter.com/ikCHXFDIS9

I don't know who wrote this or how it was sourced, but it's perfect👍 #Fortnite #FortniteBlackout pic.twitter.com/D9NZv73yph

What do the numbers mean?!

3:00 AM Twitter. The fake ones are asleep, the real ones are still up thinking about Fortnite numbers.

This is no joke – @FortniteGame are FULLY trolling us all.

Everyone trying to figure out what the Fortnite numbers mean pic.twitter.com/8phQgUeuPQ

Look at that map

So when is Fortnite coming back?

Yall really think the #FortniteBlackout is scary but never experienced that the PS2 or original Xbox had way more creepy ass sounds when your at the menu doing nothing except staring at the screen.

Me waiting for Fortnite to come back pic.twitter.com/q5NUy2KVxJ

fortnite players during the blackhole pic.twitter.com/AJ0BHGcGgV

On behalf of parents everywhere

On behalf of parents everywhere, Thank You Fortnite, for making yourself completely unplayable for an entire day.

Coming Soon Is Bringing Life Back into Your Home
DesignsponsoredDecember 19, 2019
Follow
Highsnobiety Design
What To Read Next
Load More
Search Results
Load More