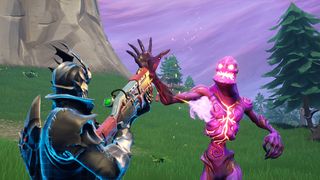 Epic Games is officially in the Halloween spirit, bringing what is being referred to as Fortnitemares to Fortnite. The update allows players to go up against creepy creatures in the game’s famed Battle Royale Mode.

The above trailer showcases the demon-like forces, birthed from Cube Fragments that appear on the map. When you kill one of these computer-generated opponents, you’ll be rewarded with loot.

In addition, the update finds the “Six Shooter” revolver receiving a new look, and you can also take advantage of new supplementary items, including the ability to redeploy the glider.

Press play above to see what Fortnitemares has to offer.

In other video game-related news, the ‘Super Mario Bros. Encyclopedia’ is a great holiday gift for Nintendo fans.

Young Thug & Diplo Are Teaming Up for the Next ‘Fortnite’ Concert
MusicsponsoredJune 23, 2020