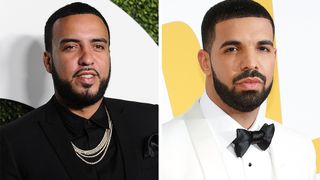 French Montana is gearing up to release his third album, today sharing three new tracks highlighted by his previously-announced single with Drake, titled “No Stylist.” At the core, the New York-inspired song is a nod to the rule-breakers in both fashion and hip-hop.

THE FLYEST DRIP CAME OUT THESE CORNERS ! NOT FASHION WEEK SHOUT OUT TO EVERYBODY OUT THERE THAT NEVER NEEDED A STYLIST FOR THAT ? “ NO STYLIST “ DROPPING TOMORROW FEAT BROSKI @champagnepapi HERE ARE SOME WISE WORDS FROM THE OG #nostylist @dapperdanharlem

“I always felt like [the Bronx] got overlooked when it came to fashion,” French Montana told Zane Lowe during today’s premiere. “And I feel like people that changed fashion was the icons that we looked up to like Slick Rick when he came out with 40 chains on all the vintage looks and even brings it up to date. When Cam’ron came out with the pink Mink and everybody you know it’s just people that changed culture because everybody thinks if you go to Fashion Week you know how to dress. That’s not, there’s ninety nine point nine people out there that don’t go to Fashion Week they could dress better than anybody on that runway. We want to give that dope boy on the corner.”

French and Drizzy have reportedly already filmed the music video for “No Stylist” in New York. Expect cameos from Dapper Dan, Slick Rick, Cam’ron, and more, as the aesthetic is due to arrive next Friday, September 28.

Alongside the Drake collab, Montana also shares “Nervous” and “Juice.” You can stream those below.

Be on the lookout for more from French Montana’s anticipated new album.

Up next, see 2 Chainz, Drake, and Quavo’s child lookalikes in just-released “Bigger Than You” video.

This Is How Many Hits French Montana, Young Thug & Kendrick Lamar Actually Have
MusicsponsoredApril 23, 2020