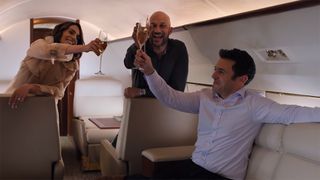 Ahead of this month’s premiere, Netflix delivers the first trailer for season two of Friends From College. The comedic series centers around a group of Harvard alumni as they deal with their complicated lives in New York City.

Per showrunners Nicholas Stoller and his wife Francesca Delbanco, the program received a significant amount of criticism following the initial season, largely due to a number of the characters being unlikeable. Specifically, viewers were unhappy with the affair that drew much of the attention during season one.

It’s been reported that Stoller and Delbanco have remedied these issues, ending that particular storyline. Season two will then take place a year after the events of season one.

What a difference a year makes. (Just kidding.) Season 2 of Friends From College arrives January 11. pic.twitter.com/2ziBCjjaJr

Up next, watch the first trailer for season two of Marvel’s ‘The Punisher.’