Fucking Awesome has dropped their latest selection of hoodies, boards, tees and caps, which in part commemorates the American skateboarder, artist and model, Dylan Rieder, alongside a wide selection of new gear. The skate brand’s collection features a commemorative “Dylan Rieder White Tee,” and long sleeved shirt, as well as a “White Dipped” and “Dylan Rieder” board which each feature graphics of a young Rieder. 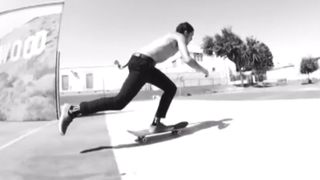 Rieder was diagnosed with leukemia in July 2014 and died due to complications related to the disease that October, surrounded by over 50 family members and friends. Rolling Stone honored his life with a feature on the five best videos from his skateboarding career.

The pieces are available at Fucking Awesome now. The t-shirt retails for $34, the long sleeve shirt for $48, and the boards are $55 each.

In style news, The LYBB Verse One slide is available for pre-order

15 Drops
The 15 Best Products to Drop This Week & Where to Buy Them
SelectssponsoredSeptember 15, 2019

Our Favorite Standout Graphic Hoodies for Under $150
SelectssponsoredFebruary 17, 2019