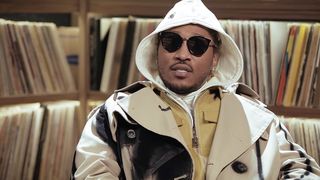 In a new interview with Genius, Future revealed that he’s quit lean but explained that he didn’t want to tell his fans at first.

“I don’t want to tell nobody I stopped drinking lean,” Future said, around the 12:12 mark in the video. “I didn’t want to tell them because I felt like then they was going to be like ‘oh, his music changed because he ain’t drinking lean no more.’ Or, ‘I can hear it when he changing.'”

He continued, “people be like ‘Damn, why don’t you even say it?’ But it’s hard when your fans are used to you being a certain type of way.”

The rest of the interview touches on his upcoming album The WIZRD, his love for André 3000, and how he dealt following the death of his close friend Seth Firkins.

On a more lighthearted note, Future also discusses how his verse on Kendrick Lamar’s “King’s Dead” came to be, and revealed that the famous line “I just fucked your girl in some Gucci flip flops” was based on a real story. Watch the video above.

Check out our ranking of the 25 Best Future Songs here.

In other music news, Tyga delivers ‘The Mummy’ vibes in “Floss in the Bank” video.