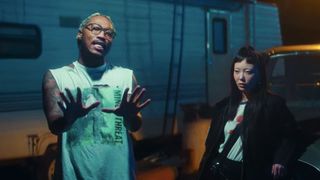 Future has followed up his Save Me EP with three videos and now he’s delivered a fourth. The “St Lucia” visuals were directed by Enfants Riches Déprimés founder Henri Alexander Levy who was also responsible for the “Government Official,” “XanaX Damage,” and “Love Thy Enemies” music videos.

Future told Complex, “The fans, they’re looking at you on their phones all day, people just on social media. So it’s good to have videos and visuals and to be able to put them out and give the fans something quality to look at.”

The song is inspired by the rapper’s hedonistic trip to the island of St Lucia. However, Levy chose to shoot the video in a less glamorous locale, using a darkened monster truck track as the backdrop.