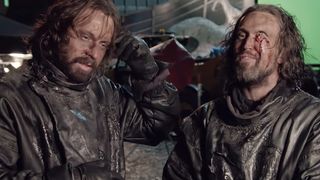 Warning: spoilers for Game of Thrones season eight ahead.

McElhenney and Starr played two of Euron Greyjoy’s men, both of whom meet swift and gruesome deaths at the hands of Theon Greyjoy as he fights to free sister Yara. The two appeared to enjoy the experience. McElhenney, whose eye is shot through with an arrow in the episode, posted “Don’t blink” in the Instagram post below.

The rest of the cast, however, were more preoccupied with the presence on set of George Lucas.

“When we found out that George Lucas wanted to visit, we thought maybe it was a practical joke,” said Game of Thrones co-creator and showrunner David Benioff. “And then we were really excited and also nervous because it’s George Lucas.” The Star Wars creator made a surprise visit to the set during the filming of the “Winterfell” episode’s homecoming parade.

Here’s What the Internet Had to Say About the ‘Game of Thrones’ Premiere
MoviessponsoredApril 15, 2019

All the References You Might Have Missed in Last Night’s ‘Game of Thrones’ Premiere
MoviessponsoredApril 15, 2019
What To Read Next
Load More
Search Results
Load More