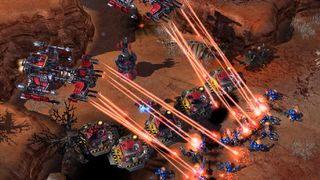 The two companies confirmed that back in December the AI “AlphaStar” decisively beat both Team Liquid’s Grzegorz “MaNa” Komincz and Dario “TLO” Wünsch 5-0 in two separate five-game series. That’s a pretty dismal result for “team human.” Check out the demonstration game above.

In the past, computer games have been used to test the performance of artificial intelligence systems (or machine learning systems). AlphaStar, the first artificial entity to defeat a top professional player, has shown how this criterion will prove increasingly ineffective, as such technology continues to exceed human gaming capabilities.

Wünsch had apparently seen footage of AlphaStar playing, and had felt “extremely confident” going into the game. However, the AI’s unorthodox strategies proved to be too much for its human counterparts. One might assume that the AI was victorious thanks to faster-than-human reaction times, but in fact the AI’s actions such as clicks and key-presses were slower than the pros’. Ultimately the DeepMind team determined the wins were down to “superior macro and micro-strategic decision-making.”

This is a significant victory for machine learning, which has made light work of games such as Mario, Quake III Arena Capture the Flag, and Dota 2 in the past. Until now, however, the StarCraft game has proved too complex. This latest defeat against expert human adversaries is certainly one for the record books.

Google’s Stadia Platform Is the Future of Cloud-Based Gaming
DesignsponsoredMarch 19, 2019

You Can Visit the Palace of Versailles for Free With Google’s VR Tour
DesignsponsoredOctober 1, 2019

Check Out This Mockup of Google’s Cloud-Connected Game Controller
DesignsponsoredMarch 12, 2019