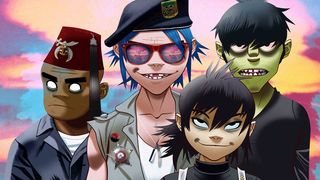 Just days ago we received word that Gorillaz will be releasing their new album, The Now Now, next month. Now, the virtual band has detailed the impending project, due out June 29, in addition to sharing two new tracks and an official video in support of the work.

First up, Gorillaz present “Humility,” along with its coinciding music video (above), featuring assistance from American guitarist and singer-songwriter, George Benson, followed by “Lake Zurich.” “Humility” was premiered by Zane Lowe as today’s World Record.

While speaking with Lowe, Damon Albarn revealed that The Now Now was produced by James Ford, thus featuring contributions from the aforementioned George Benson, as well as Jamie Principle and Snoop Dogg.

Again, The Now Now is slated to arrive June 29. See the album’s tracklist underneath.

In other music news, Cardi B and Maroon 5 have released new track, “Girls Like You.”

You Can Now Stream A Prince Album Full of Unreleased Songs
MusicsponsoredApril 25, 2019