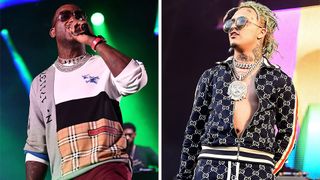 Gucci Mane is connecting with the younger generation for his latest release, tapping Miami-born rapper Lil Pump for “Kept Back.” The track accounts for the second single from Guwop’s upcoming Evil Genius project.

The collaborative song was premiered today on Zane Lowe’s Beats 1 radio show, as Gucci also took some time to speak on Evil Genius.

Gucci also went on to reveal that Offset, Quavo, Kevin Gates, 21 Savage, and YoungBoy Never Broke Again will appear on Evil Genius, which has still yet to receive a release date.

In speaking on Lil Pump and the newer generation of rap, the Atlanta icon noted, “I like the way they promote themselves. I’m a big fan of Pump. I think he be flowing. They make good music so I wanted to collab with them. They’re dope.”

See above to stream “Kept Back,” then look underneath for the Gucci x Zane Lowe interview.