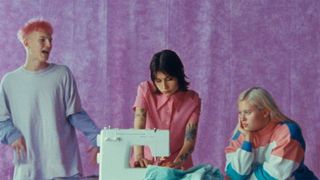 Gus Dapperton is in full roll-out mode for his debut album, and his latest single “Fill Me Up Anthem” does not disappoint. Today, he dropped a pastel-tinted video for the tune. As the title suggests, the post-pop maestro intends to inflate our hearts with this smooth piece of synth-pop infused with small doses of psychedelia and R&B. The track follows the previously released “My Favorite Fish,” which will also be featured on his forthcoming project, Where Polly People Go To Read due out on April 19 via AWAL Recordings.

Dapperton is currently wrapping up a European tour, but has a sold-out album release show at Elsewhere in Brooklyn, New York on April 20. For more on the native New Yorker, revisit our intimate profile of him from the Ones To Watch series.