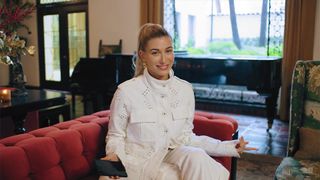 Prior to the cover shoot manned by photographer Annie Leibovitz, Hailey met up with Vogue to answer 73 pressing questions. The 22-year-old model dished on her relationship with Justin, going so far as to reveal how he proposed, then detailing his best traits. Hailey also disclosed that she would love to walk in a Louis Vuitton fashion show soundtracked by Kanye West.